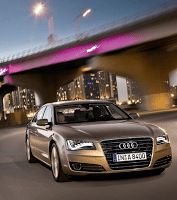 Is Hyundai on a roll? You better believe it. The 2011 Hyundai Sonata is a good-looking hit, the 2011 Hyundai Elantra will be a hit, and sales are up, up, up every month. In fact, the Hyundai division is out-selling the Honda division through the first ten months of 2010 by 1458 units. But the Genesis? Well, that’s a different story.

As of this point, Korea has no competitor for the large luxury car segment – and it’s more likely that The Good Car Guy will place the 2011 Hyundai Equus in the midsize luxury car category with the Genesis – but there are four Germans, one Brit, and one Japanese car. Lexus LS sales are down 10% in 2010. Jaguar XJ sales are up 126% but still trail the LS’s year-to-date total by 37. Audi A8 sales were up 1250% in October 2010 from a very lowly 2 A8s sold in October 2009. A8 sales are up 12.2% on the year, thanks mainly to October’s gains. Porsche has very little of 2009 to compare this year’s year-to-date sales with, but Panamera sales did rise 50% from September 2010. The long-standing limo rival between the BMW 7-Series and Mercedes-Benz S-Class went to BMW in October but Mercedes-Benz holds the Canadian lead for the calendar year so far, with a little help from the CL-Class. 7-Series sales in October were up; S-Class/CL-Class sales were down. 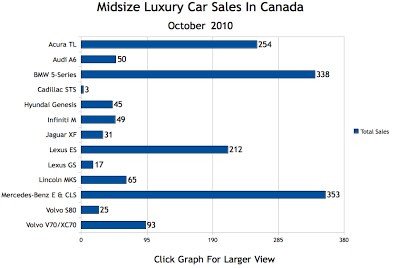 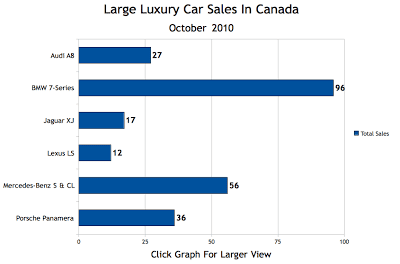