Home
All Vehicle Rankings
Passenger Car Sales
Midsize Car Sales
Car sales were down 31% in the United States in August. “Down 31%” is a figure which goes back to August 2009, a month in which Cash For Clunkers stimulated car sales rather effectively. Whether Cash For Clunkers did anything to keep the industry alive or “green up” America’s car fleet I know not, but new car sales shot through the roof. Without Cash For Clunkers, August 2010 had no chance of looking good. But even with these facts in mind, certain vehicles aren’t able to hide their lackluster performances behind the Cash For Clunkers shadow.

Let’s look at the stunning 2011 Buick Regal. She is a beauty. Of course, beauty is only skin-deep. Fortunately the 2011 Regal is also a pleasant car to drive, even if you want to give’er a little in the twisties. Nevertheless, the Regal’s sales growth has been suspended; hopefully temporarily. From 150 U.S. sales in May to 321 U.S. sales in June to 1703 U.S. Sales in July, the new Regal was showing signs of catching on. But then August’s Sales Stats came in and Regal sales totalled just 1704, a gain of 1, as you can see in the Graph below. Interestingly, Buick can’t blame a slow sales month for the growth suspension. See, sales of the Buick Enclave, Buick LaCrosse, and Buick Lucerne improved compared to last August. Even without the 2011 Regal, Buick sales rose by 2274 units.
And if a chart which contrasts the Regal’s poor sales with high-volume midsize sedans isn’t fair to your eyes, scroll down to see supposedly lower-volume midsize luxury sedans, vehicles which are marketed at a much higher price point. The Mercedes-Benz E-Class beat the Regal by 4178 sales. The Acura TSX, Buick’s target for the Regal? Acura nabbed over 2400 buyers for their smallest sedan. Perhaps there is a stock issue for General Motors; perhaps the naturally-aspirated 4-cylinder’s price doesn’t make for favourable comparisons with the larger LaCrosse. (That’s sort of what The Good Car Guy said regarding Canadian Sales Stats last month.)One way or another, Regal sales should rise in the future. Present stagnation is most likely a blip on the radar. Or so Buick hopes.
Details on vehicles as varied as the 2011 Buick Regal, Mitsubishi Galant, Subaru Outback, and Cadillac STS are in the accompanying Graphs. 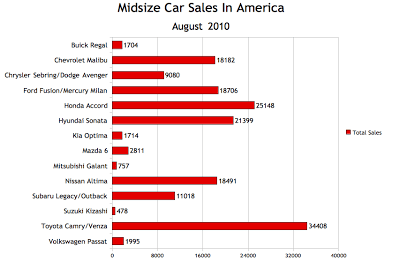 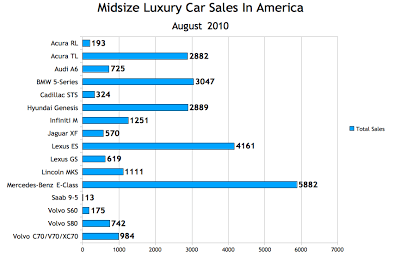