Now for a look at midsize car sales in Canada. Working on the assumption that in a particular vehicle category, though volume will invariably be wildly different, the best car is the best car regardless of country, compare the order in which midsize cars are ranked from Canada and the USA. In May 2010, Americans chose the Toyota Camry and its Venza wagon derivative more than any other car, no matter the size or bodystyle. Toyota was followed closely by the Honda Accord behind which you’d fine the Ford Fusion/Mercury Milan, Nissan Altima, Chevrolet Malibu, Hyundai Sonata, and then the Subaru Legacy and Outback.
Now, Toyota Venza sales in the USA were just 4,854, just enough to push Toyota past Honda. In Canada, Venza sales were nearly as strong as Camry sales in May – 1,006 to 1,374. So Toyota wins in Canada, too, but wouldn’t have come close to doing so without the Venza, whereas Toyota USA would’ve been nipping at the Accords heels without the Venza. Moving down the line in Canadian midsize car sales, the Ford Fusion comes closest to Toyota. Then comes the Chevrolet Malibu, Hyundai Sonata, Nissan Altima, and finally the Honda Accord in sixth position. 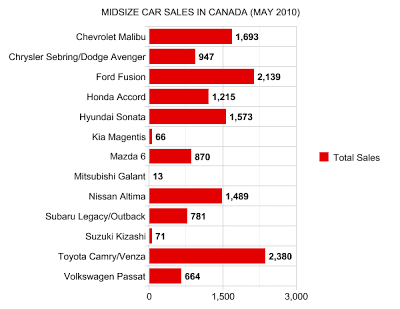 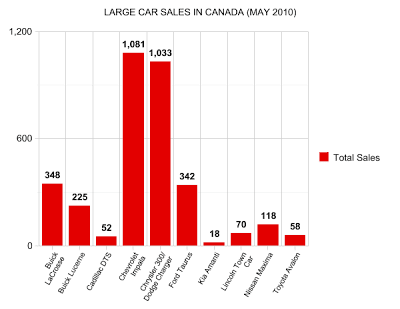