Talk was last month that the 2011 Buick Regal hadn’t yet caught on. That story is still the same. Buick Regal sales in August were actually lower than the total put up by the Regal in July.

Another story in July’s equivalent post of this type was the Cadillac STS being out-sold by the Acura RL. Cadillac escaped from that danger in August when GM Canada sold its second STS. Yes indeed, Acura RL sales fell 92.3% to a grand total of 1. Uno. Un. Eins.
GoodCarBadCar.net also discussed the Mitsubishi Galant last month. Galant sales rose from their July total but fell 42.1% compared with August 2009. And the Lincoln MKS/Hyundai Genesis sedan comparison from July 2010? Well, MKS sales fell from August 2009’s 110, but Genesis sales fell 39.6% to 55. August 2010’s trophy goes to Lincoln.

To be more correct, August 2010’s trophy for midsize luxury car sales success goes to the Mercedes-Benz E-Class, as always. But congratulations are in order for Hyundai, too. Sales of the 2011 Hyundai Sonata jumped 164%, surpassing even the combined total of Toyota’s Camry and Venza. Just wait for the Sonata Hybrid and Sonata Turbo to set sail.

Details on midsize luxury car sales and mainstream midsize car sales are in the Graphs below. 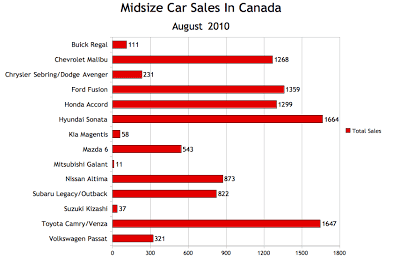 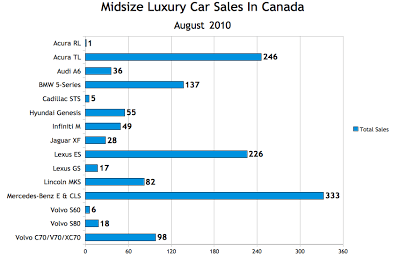