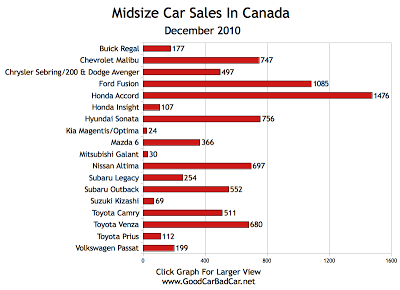 Home
All Vehicle Rankings
Passenger Car Sales
Midsize Car Sales
There’s a link in the Related section below the Graphs in this post where you’ll be taken far, far away to the land of Best-Selling Cars. It truly is a wonderful place, but it’s a place where only one of the 28 cars shown actually resided in December 2010. Indeed, Honda had a rip-roaring December, a month in which the Civic was Canada’s best-selling car, the Fit wasn’t far behind, and the Accord slotted in as Canada’s ninth most-popular car.

As per the requests of numerous individuals, a handful of vehicles have been split up for the sake of clarity. As you’ll see, the Chrysler 300 and Dodge Charger are now separate in the Large Car Sales chart because there was no lack of space. Toyota’s Camry and Venza, as well as Subaru’s Legacy and Outback, are also divorced for the purposes of expanding the Midsize Car Sales chart. This certainly weakens Toyota’s appearances up in here. Camry sales dropped from 1200 in December 2009 to just 511 in December 2010, barely more buyers than Chrysler found for the Sebring/200/Avenger group. Pitiful.

It’s perhaps more embarrassing for Toyota that Avalon sales were up 65% in December 2010. Embarrassing how? Well, how bad must December 2009 have been if a 65% gain only nets 28 buyers? Every time Toyota Canada sold an Avalon in December, Ford’s seventh Taurus buyer entered a Blue Oval showroom. Before this turns into a Let’s All Bash Toyota session, take special note of the Chevrolet Malibu’s 26% decline, the Impala’s 69% cliff dive, and the Buick Regal’s third-place finish…. among Buick cars. 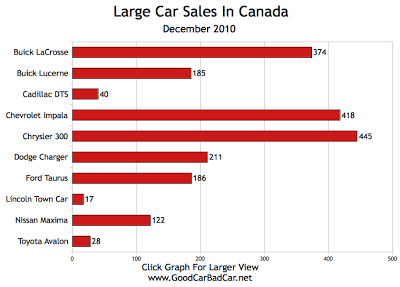