When the Toyota Camry joins up with anything to manifest the longest line on a Graph, you’d assume the Camry was making up the vast majority of those sales, right? Well, you’d be wrong. In Canada in October 2010, the Toyota Venza was responsible for 1169 of the pair’s 1756 sales.

The true best-selling midsize car in Canada in October was the Honda Accord, though one suspects a handful of the Accord’s 1515 sales were of the abominable Crosstour variety. Accord sales were up 18.7%. The 2011 Hyundai Sonata was another strong player but even Hyundai’s 76.4% improvement to 1071 sales couldn’t touch the Ford Fusion or Nissan Altima’s totals. 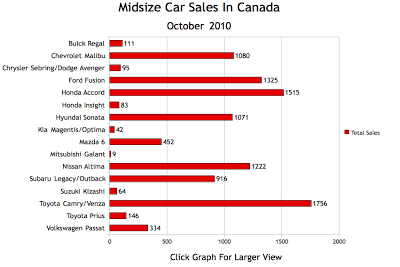 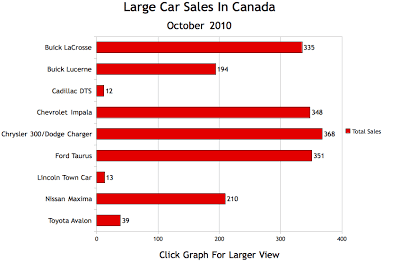