Volkswagen Canada may be able to increase its sales volume by way of the inexpensive but large 2011 Jetta, but in a segment or two above the Jetta, the Volkswagen Passat will continually face rejection until Volkswagen introduces a more realistic competitor for the Hyundai Sonata and Ford Fusion.

Oh, the Passat is nice. But it’s not a luxury car in the true sense of the term, and its base price is nearly $8000 higher than the Ford Fusion’s. If Volkswagen wants volume, which they do, VW’s New Midsize Sedan will have to face a drastic price reduction. For every Passat or Passat CC Volkswagen Canada sold in November 2010, Ford sold 5.5 Fusions. And again, I readily admit I feel very bad for the family that only got half a Fusion.

To be frank, Volkswagen doesn’t even have a competitor for the large mainstream car segment. But they’re not missing out on much. There were 2010 large cars sold in November 2010 according to the Graph below. 64 of those were examples of airport limos or discontinued models. Many large cars are struggling to find buyers, even more than last year. Chrysler 300 sales are down in 2010 (but up slightly in November). The same is true of the Cadillac DTS. The Chevrolet Impala, Ford Taurus, Dodge Charger, and Lincoln Town Car all posted declining sales in 2010. Bright spots include the Buick LaCrosse (up 126%) and Nissan Maxima (up 98.2%). But even those two cars would be deemed bit players if compared with successes like the Honda Accord or Toyota Venza.

Details are in the Graphs. Have a look. 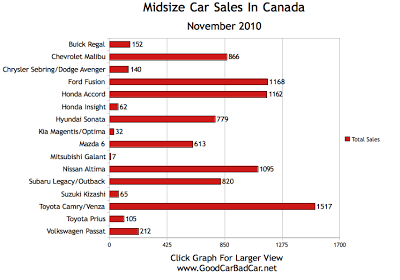 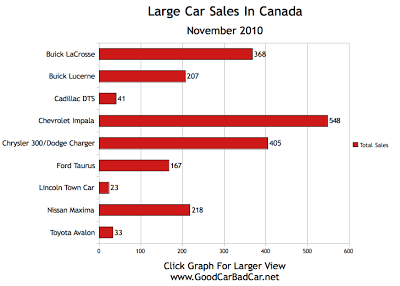