25% of Canada’s Top 20 Best-Selling Cars from June are in the Graphs below. It was recently pointed out that 65% of Canada’s favourite cars were of the small variety. The differences between the Canadian and U.S. markets are striking.

Still, there are some very favoured cars shown below. The Ford Fusion approximately three buyers for every ten who go to an F-Series pickup. That’s sayin’ somethin’. By the way, Camry and Venza sales are joined, but in Canada it was the Venza which stole the show in June, beating the Camry’s 1,048 units by 14.
Then are those vehicles which attract consumers on very rare occasions. Mitsubishi’s Galant is all but forgotten, almost Diamante-esque in its forgettability. For whatever reason, and it’s actually fairly hard to come up with one, the Suzuki Kizashi still can’t find any driveways other than the ones leading toward Suzuki showrooms. and the Volkswagen Passat? Well, it’s time for the New Midsize Sedan.

Large sedans can still do okay in Canada, but it’s a rare breed. The Chevrolet Impala is priced to sell. Dodge Charger sales were stronger tha the Chrysler 300’s by 48 units. Ford Taurus sales dove a bit from April to May but are back into the swing of things now. Large cars certainly aren’t at the forefront of the Canadian buyer’s mind right now, but you can’t escape the fact that many large cars are more appealing than they were when Canadians were actually buying them ten or twenty or thirty years ago. 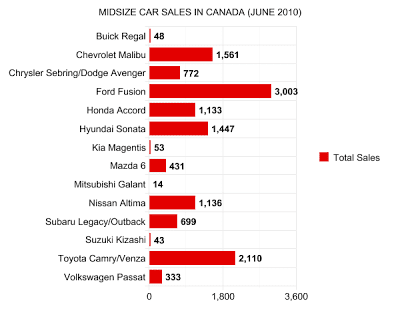 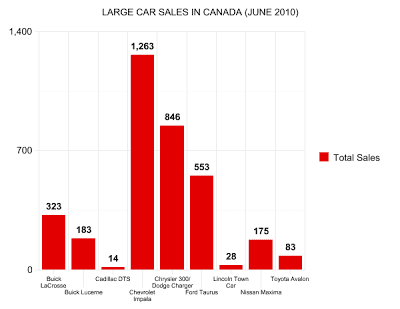