With the advent of a handsome new Suzuki midsize sedan and an attractive Hyundai Sonata, the time seems right to start including a midsize sedan Graph in the monthly Sales Stats rundown on GoodCarBadCar.net. It’ll take time for the Suzuki Kizashi to get in to the swing of things. March’s Graph, as you’ll see below, isn’t kind to the swoopy Suzuki. Still, the bigger story remains that which was described here on April 8th. Amidst talk of the populace turning against Toyota, the Camry reacquired its title as the best-selling car in America.

One thing to keep in mind when viewing the Midsize Car Sales this month and in future months, on both the American and Canadian versions, relates to absent vehicles and those which are included. For instance, the Volkswagen Passat CC would add 1,994 sales to the Passat’s total. Meanwhile, the Honda Accord’s total includes Crosstour sales. The Volkswagen Jetta will be seen on a Graph with compact cars, despite its sometimes lofty price scheme. Some vehicles, the Ford Fusion and Mercury Milan for example, are joined. Why? Simply as a space-saving technique.

The Good Car Guy makes these arbitrary decisions either because the automaker already tabulates sales a certain way, or because of space concerns, or as a result of perceptions relating to “direct competitors”, or because a line has to be drawn somewhere. Live with it, but feel free to leave your comments arguing for or against the format. 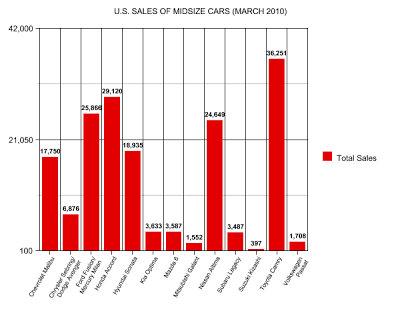