It’s a rare thing when Lexus isn’t the best-selling luxury brand in the United States. Upon witnessing a month in which the combined efforts of every Lexus model didn’t bring Toyota’s upmarket division victory, it was clear to The Good Car Guy that much of the blame could be laid at the wheels of the bigger Lexus cars.

Sales of the Lexus ES slipped in June 2010. The Lexus GS has never been a big part of the Midsize Luxury Car battle. At the same time, Mercedes-Benz kept E-Class sales going strong and a new BMW 5-Series began attracting buyers at a greater rate.
And it appears as though faulty steering and subsequent media attention paid to the stop-sale on Lexus’ LS big sedan  have finally stunted LS sales. In June, the newish BMW 7-Series, Mercedes-Benz S-Class, and freshly redesigned Jaguar XJ all took it to the jumbo Lexus. In fact, the Porsche Panamera posted sales volume equal to the LS, too.
These two factors, in part, led to a U.S. Lexus downswing in June. Both Mercedes-Benz and BMW came out ahead of the Lexus brand in overall sales as Lexus failed to top 18,000 units for the third time in 2010. Through the first six months of 2010, the lead Lexus holds over Mercedes-Benz is down to just 415 vehicles. Midsize luxury car sales and large luxury car sales from June 2010 are in the Graphs below. 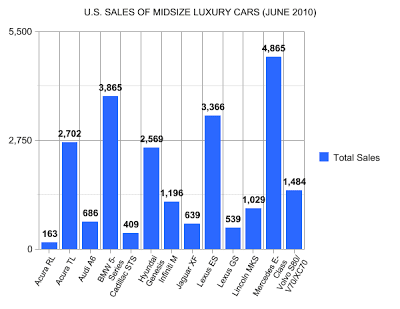 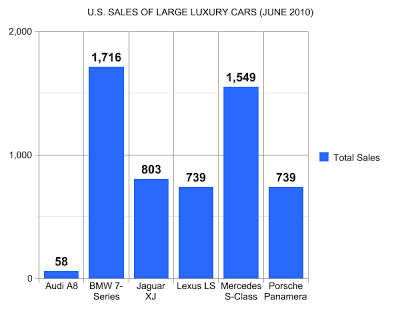