Don’t judge the 2011 Mazda 2‘s long-term potential for success on July 2010. On sale for only a few days, the month for the Mazda 2 to try and outshine its fraternal twin, the 2011 Ford Fiesta, is August. Numbers for August, hopefully numbers higher than 38 sales, will be revealed in early September after The Good Car Guy gets back from another vacation to Prince Edward Island.

Whether or not the Ford Fiesta will be able to attract large numbers of clients and secure those clients despite its high price, the influence of the Ford Fiesta didn’t harm the segment leader in July. Though Nissan Versa sales dropped 9.4% from last year during the same period, Versa sales jumped from 6,762 in June 2010 to 7,725 in July 2010, a month in which we can safely say the Fiesta was known as the newest/latest/greatest/brightest/bestest.

GoodCarBadCar.net is holding out hope for the Fiesta – in hatchback form it’s a looker with a fuel efficient powertrain, great dynamics, and loads of features – but with a base price 33% beyond the Versa’s, the Fiesta could be in for a tough fight if it wants to take over the category.

Up a notch in size and expense, generally speaking, Toyota and Honda and Hyundai proved the merits of their respective compacts. The new Elantra, known as the Avante in other parts, isn’t far off, but sales of the current Elantra are as strong as can be expected. Honda’s Civic, in its eighth generation, feels like it’s been around forever but still managed to out-sell the Mazda 3 by 13,526 units in the USA last month. And the Corolla, with its Matrix hatchback sibling, was the second-best-selling car in America in July.
Details on July’s U.S. sales of subcompact and compact cars are in the Graphs below. 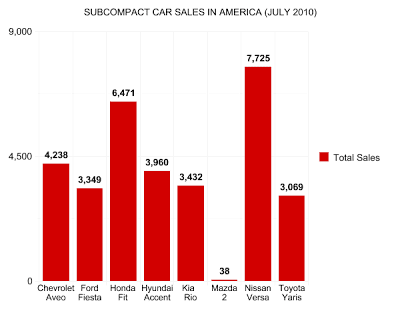 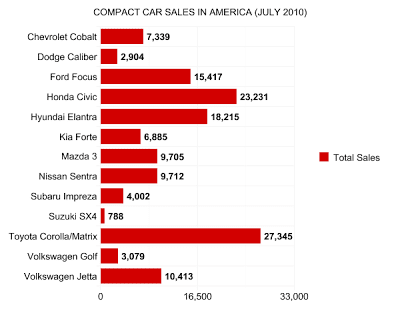