Going against almost everything the automotive enthusiast believes in, buyers of small luxury cars are turning to the rather ugly, quite slow, not-at-all-fun Lexus HS250h when desirable cars are available. Want gorgeous? There’s the Volvo C30; and it’s not about to drink like a sailor, either. Sportiness is available in boatloads if you’ll just buy a BMW 1-Series. Make it a 128i, a 135i…. anything, just make it a 1-Series and not a Lexus HS. How ’bout hatchback versatility in a relatively handsome and sporty package, with a dose of efficiency in TDI form? That’ll be the Audi A3 TDI. But no.

No, the compact luxury car segment is now controlled by the Lexus HS250h. Although it’s probably safe to say there wasn’t much cross-shopping going on. Anybody who drives the HS250h back-to-back with any of the other three; anybody who looks at the HS250h parked beside any of the other three; wouldn’t actually end up choosing the Lexus, would they? 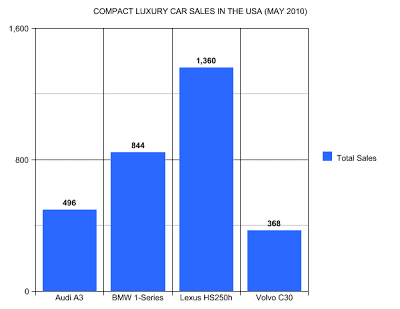