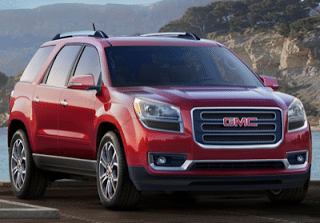 That was enough for Ford to lay claim to the best U.S. Escape sales month in the model’s history.

Ford also landed the still-surging Explorer in the top five, 2125 sales ahead of the fifth-ranked Toyota RAV4. 1090 of the Explorers sold were Police Interceptor Utilities. Ford’s Edge was the ninth-ranked utility vehicle in March.

How important are these three vehicles to the Blue Oval? Quite. With help from the Flex and Expedition, Ford utility vehicle sales hit 65,007 in March 2013, equal to 28.4% of total Ford brand volume last month. Of course, Ford also sold 67,513 F-Series pickups in March.

In addition to the three Fords, Detroit brands contributed eight other SUVs and crossovers to this month’s top 20. That includes three Jeeps, three Chevrolets, and two GMCs. The biggest gains visible in the top 20 were produced by the Nissan Pathfinder, GMC Acadia, and the Subaru Forester.

GoodCarBadCar already published lists for the whole truck market and for March’s 20 best-selling cars. You’ll find key links at the bottom of this post and hundreds more best seller lists at the Best Sellers page. You can also make a selection at GCBC’s Sales Stats page in order to find historical monthly and yearly sales figures for any make and/or model. But below, America’s 20 best-selling SUVs and crossovers are ranked by March 2013 sales.