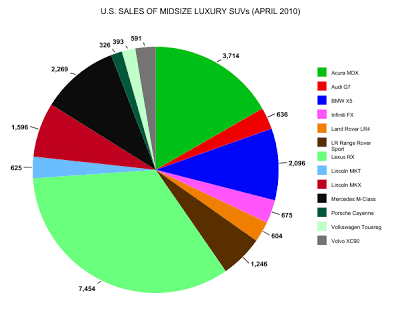 Home
All Vehicle Rankings
SUV Sales
Midsize Luxury SUV Sales
No wonder earnings at luxury automakers exceed the profits witnessed in decades past. At one time, Mercedes-Benz sold a a few different models: sedans, some coupes and convertibles, and…. that’s it. In concert with the typical array of luxury cars, most luxury automakers now sell a fleet of SUVs. Lexus, with its greener-than-most image, markets the RX crossoverish SUV seen in the Graph below, as well as the GX and jumbo LX for which Sales Stats will be available soon. Add on sales of these vehicles to what once was a lineup of three sedans and a large coupe and it’s not hard to see how Lexus makes Toyota bunches of money.
Of the twelve rival vehicles in this Midsize Luxury SUVs Graph, eleven were not available when the Lexus RX300 first grabbed hold of an unknown segment by the scruff of its neck in 1998. Sure, the 2010 Lexus RX350 must share the wealth with major luxury manufacturers, but there’s plenty of wealth to be spread around.