It’s been many years since anyone was surprised to hear that Lexus was routinely out-selling far more prestigious luxury automakers from Germany. Once again, even as a troubled brand with the GX460 on a sales stoppage and its parent blasted by NHTSA, Lexus squeaks out a victory.

Don’t be fooled by Audi’s relatively low finish in these U.S. standings either. Month after month Audi’s sales improve, and citizens of the world out there are buying Audis at an even faster rate. The 2011 Audi A8 won’t be a huge boon to Audi’s U.S. figures, but its arrival at dealerships will add cachet. Up above Audi a few notches sits BMW. As you’ll see in a future Sales Stats Graph, the BMW 3-Series is once again the best-selling luxury car in America. Even so, Lexus is still in control of the U.S. luxury vehicle Marketplace. 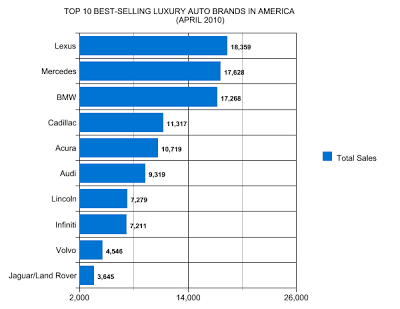