Take a second to compare the Midsize Luxury Car Sales Graph below with the one from May. What’s different? Keep looking, keep looking. Okay, you give up?

I don’t blame you for not being able to spot that Acura’s RL isn’t a part of the June 2010 edition, but was present in May 2010’s Graph. Rumours started up over the last week about the demise of Acura’s RL. Acura calls it their flagship, however, and denies the rumours. Of course, this caused The Good Car Guy to point out that the RL has almost ceased to exist anyway, as evidenced by this Graph. Acura didn’t sell a single RL in Canada in June. In June of 2009 Acura Canada only sold 10. Acura has only sold 22 RLs in Canada over the course of six months in 2010.

The segment we call “midsize luxury” isn’t an easy one to join. The long-established Mercedes-Benz E-Class and BMW 5-Series dominate globally at the top end. Lower down on the price scale, the Lexus ES and Acura TL are popular in North America. Even the excellent Audi A6 is all but ignored in Canada, and this from a brand with rapid sales growth and the distinct possibility of fulfilling its desire to be the planet’s biggest luxury automaker sometime later this decade.

Audi came perilously close to achieving RL-status with its R8 in the Large Luxury Car segment. The 2011 Audi A8 should help Audi sales stay away from a big fat zero. But it’s unlikely that Audi can catch the BMW 7-Series or Mercedes-Benz S-Class anytime in the near future. Signifiers of true financial success, the 7-Series and S-Class are like McMansions or 160GB iPods: unnecessary, but nice to have. 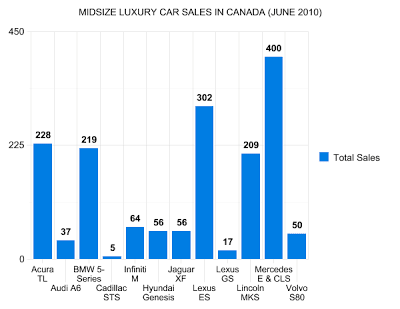 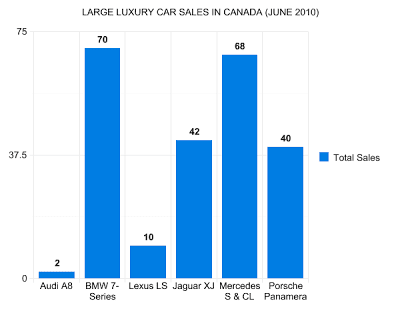