Nothing says “wife of a retired lawyer” quite like a Mercedes-Benz E-Class. Well, except in Europe where the E-Class says “taxi” better than anything else. The stereotype can’t hold true, can it? I mean, Mercedes-Benz Canada sold 338 E-Class & CLS-Class sedans in September 2010, up from 286 in September 2009. There can’t be 338 wives of retires lawyers out looking for a new Benz in Canada during the 30 days of September, can there? Of course not. It figures that there’d be about 200 wives of retires lawyers, the remaining sales going to husbands of retired lawyers, men who chauffeur their powerful wives to local wine bars.

Ah, stereotypes. Car buyers are just like the buyers of everything else. Even as we all need a toaster, and thus no toaster designer can accurately predict the exact demographic of his or her future buyer, no auto sales analyst can come close to identifying the buyer of a luxury sedan. They say – whoever they are – that luxury car buyers don’t want front-wheel drive. Tell that to the 2095 people in Canada who’ve bought an Acura TL in 2010 and the 240 people who acquired a new Lexus ES in September.

Of course, there are certain stereotypes which became stereotypes because they’re true. It seems quite certain that the 16 Audi A8 buyers in Canada last month all went for the A8 because they didn’t want a Jaguar XJ, Mercedes S-Class, BMW 7-Series, Lexus LS, or Porsche Panamera. 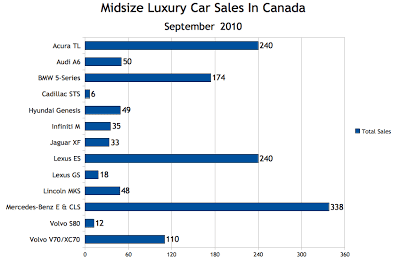 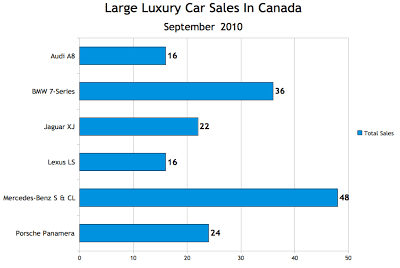