Week after week, month after month, Lexus sells more luxury automobiles than anybody else in America. Big-name players like BMW and Mercedes-Benz come close. Japanese rivals Acura and Infiniti? Tens of thousands of sales behind, in fact. For a peek at Porsche, Saab, and Hummer sales steer your eyes towards the bottom of this Graph.
Proving Ford’s momentum is its Lincoln subsidiary which managed to sell more cars to the inhabitants of the United States in 2009 than did Audi, Infiniti, or Volvo. Cadillac, meanwhile, fared decently thanks to the new SRX and Escalade figures which, though lower than in ’08, are still shockingly impressive. 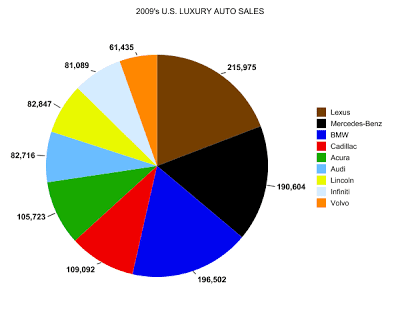