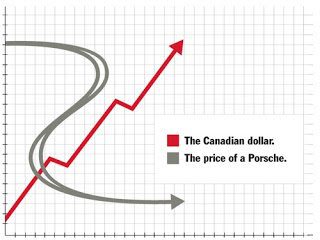 A smaller population that’s forced to pay more for new vehicles than their neighbours will inevitably acquire fewer new luxury cars in the span of a month. Just how many fewer vehicles are we talking about? Saab sold 385 cars in the United States in May. In Canada, Saab sold 20.

This we know, Canadians aren’t going to buy that many premium vehicles. But, to a certain extent, Canadian luxury car buyers prefer a different sort of luxury vehicle, too. Oh, Mercedes-Benz and BMW are leaders, no doubt. The brand ranked third, however, was Audi. Following Audi were Acura, then Lexus, then Volvo, then Cadillac, Lincoln, Infiniti, Porsche, Land Rover, Jaguar, Saab, Maserati, and Bentley. Compare that with the U.S. order of BMW, Mercedes-Benz, Lexus, Cadillac, Audi, Acura, Lincoln, Volvo, Infiniti, Land Rover, Porsche, Jaguar, Saab, Bentley, and Maserati.

Which fact stands out? Here’s what you should be noticing: Lexus. Toyota’s luxury brand is in a state of flux lately, but Americans have always been more keen on Lexus than their northerly counterparts. Indeed, the Lexus sales decline in May 2011 in Canada wasn’t as bad as it was in the United States. Yet the percentage of U.S. luxury car sales afforded to Lexus, its luxury segment market share, was still nearly 11% last month. In Canada, Lexus’ market share in the luxury category fell from 11.61% in April to 7.58% in May, as you can see in the pie chart below.

While it won’t surprise frequent readers who understand the depths to which Acura, Lexus, and Infiniti sunk after Japan’s March 11th disasters, seeing the percentage of the luxury market owned by German manufacturers climb from 56.49% to 59.94% over the course of 31 days is a sign that Audi, BMW, Mercedes-Benz, and Porsche aren’t just picking off potential TL, IS, and M35 buyers. The German manufacturers are also participating in a numbers game.

Mercedes-Benz is advertising the 48-month lease of a C250 Special Edition at $358/month, save for the fine print. Audi has financing offers beginning with a 1.9% rate over 72 months. BMW’s top-of-the-line 335xi can be financed at 1.9% for 60 months. The price of a Porsche Panamera S dropped $11,900 this year. That’s an aggressive way of maintaining a lead over the Japanese luxury brands, even after they return from the low-production volume doldrums. 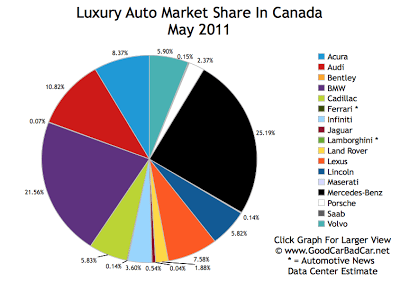