The luxury auto marketplace in Canada underwent a very slight shuffling of the deck in June 2011. Mercedes-Benz shifted from first into second as its market share in the luxury segment fell from 25.2% to 22.3%. BMW, up 16.8% year-over-year, increased its portion of the luxury market from 21.6% in May to 25.4% in June.

Infiniti sales plunged 25% from June 2010 levels but in contrast to May 2011, Infiniti’s June 2011 performance improved in contrast to its rivals. The story was similar at Lexus.

Aside from obviously premium cars like the Hyundai Equus, Chevrolet Corvette, and Nissan GT-R – models which wear mainstream badges – the Canadian luxury car market was worth 13,802 sales in June. That’s 8.4% of the overall new vehicle market. In the United States, June luxury brand sales accounted for nearly 11 out of every 100 total sales. 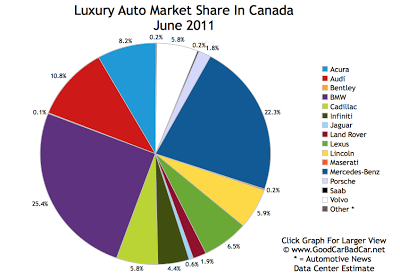