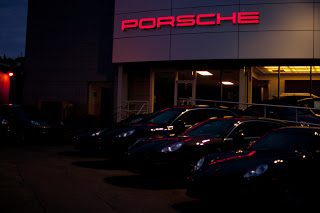 One in five premium-brand vehicles sold in Canada in April wore the blue and white propeller badge of BMW. In a German triad we’ll call BMBenzdi, BMW, Mercedes-Benz, and Audi owned more than 54% of the Canadian luxury auto brand market last month. That’s the sort of market share that makes other automakers feel like packing it in and heading home. Fortunately, they’ve hung around to supply us with compelling alternatives like the Cadillac CTS (338 sales in April) and Volvo S60 (167 sales in April).

South of the border, BMBenzdi’s market share last month was closer to 40%. That left a lot of room for other automakers to make healthy profits. Even a niche automaker like Saab managed to sell 696 cars in America. In Canada, where the overall market size was seven times smaller, Saab sales totalled just 21 cars, 33 times fewer than the company’s U.S. tally. How’zat happen? Thus, Saab’s Canadian luxury auto brand market share was 0.15%, barely distinguishable on the Graph below.

It’s not as though small auto manufacturers can’t run through the BMBenzdi gauntlet to find buyers. Porsche Canada sales skyrocketed 43.6% in April as the Zuffenhausen gang’s luxury auto market share grew from 1.6% in March to 2.31% in April. 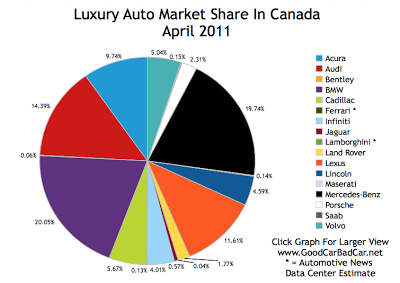