Nearly 45 out of every hundred premium brand vehicle sales in America in May occurred in Mercedes-Benz, BMW, and Audi dealerships. Excluding expensive vehicles which wear mainstream badges – cars like the Chevrolet Corvette, Nissan GT-R, and Hyundai Equus – there were 113,558 luxury brand automobiles sold in May 2011. That figure includes the Automotive News Data Center’s estimates for Rolls-Royce, Maybach, and a handful of others.

Compared with April, Lexus market share in the U.S. luxury segment fell from 14.7% to 10.8%. Acura slid from 9.7% to 7.9%. Infiniti’s lower volume and smaller decline meant its market share loss wasn’t quite as significant. Meanwhile, BMW climbed 15.6% in March; Mercedes-Benz produced gains of 5.9%; Audi was up 13.6%; and Porsche jumped 50.4% to 2817 sales, 45% of which were Cayennes. One other thing to keep in mind: because of rounding, Maybach is displayed in the chart as the possessor of absolutely no market share. Automotive News estimated, however, that Maybach sold 4 cars in May, down 20% from the same period of a year ago.

As a collective fighter of the common man’s machine, the 113,558 sales produced by 20 brands represented in the luxury auto market share chart below accounted for 10.7% of the overall new vehicle market. That’s up from 10.3% in April but down slightly from 10.8% in May 2010. 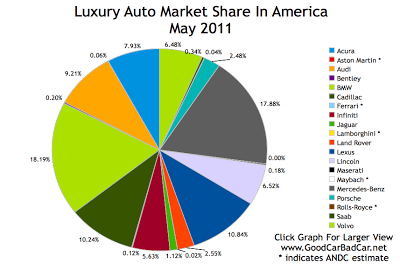