Premium auto brands sold 119,405 vehicles in April 2011 in the United States. Obviously, as you can see from the chart below, that figure excludes vehicles like the Hyundai Equus, Chevrolet Corvette, and the $58,925 2011 GMC Yukon Denali Hybrid.

Seven luxury automakers held more than 7% market share in April. Mercedes-Benz led the way with 16%, down from 17% in March. Audi, BMW, and Cadillac all grew their portions of the premium market. Audi’s British cousin, Bentley, narrowly improved its share despite falling sales. Audi’s Italian cousin, Lamborghini, is estimated to have sold 27 cars, up from 24 in April 2010, enough for two-hundredths of a percent of the premium market.

Volvo, Jaguar, Land Rover, and Aston Martin are all former Ford Premier Automotive Group partners and all (except for Land Rover’s very negligible loss) held a greater share of the market in April than in March. Jaguar’s growth was especially impressive as the Indo-British saloon car builder posted a year-over-year sales increase of 39% and a month-to-month increase of 43% from March. In those same periods, the overall new vehicle market in the USA grew 18% and slid 7% respectively, highlighting Jaguar’s improvements. 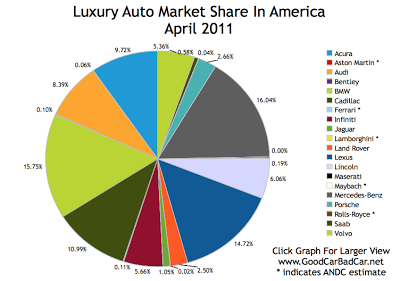