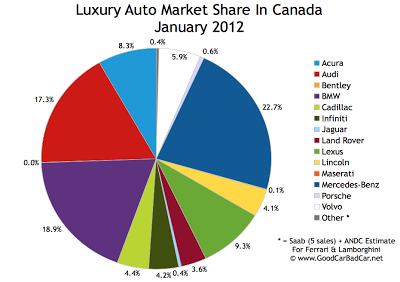 Home
Top Level Reports
Brand Marketshare
There are three main points to take away from the January 2012 sales results as they were reported by luxury auto manufacturers competing in Canada.

First, six out of every ten premium brand vehicles sold in Canada last month were either badged with Mercedes-Benz’s three-pointed star, BMW’s blue and white propeller, or Audi’s four rings. Fully 59% of the 8500 sales went to the Germans.

Second, the Range Rover Evoque is really helping Land Rover, so much so that the British builder of SUVs finished January within 55 sales of the much more mainstream Infiniti and only 42 sales behind Lincoln. The Evoque was the brand’s best seller and Canada’s 21st-best-selling premium vehicle overall.

Finally, and I say this with caution, Jaguar really, really needs an SUV/crossover. With only 33 sales in January, Jaguar needed to grow another 40% just to catch Porsche. It’s no shame: without SUVs and crossovers, Volvo would lose 40% of January’s sales, Porsche would lose 47%, and Audi would be down from 1501 units to 650. But with a massive sedan competing in what is anything but a massive market (the XJ), a big GT (the XK), and the XF attempting to succeed on a mission which no other car has – beat the E-Class and 5-Series – Jaguar will never sell very many vehicles.