Battling for second place is what top tier international hockey teams (other than Canada) are used to at major tournaments. A fight for third and fourth place is what you’ll see at most tennis tournaments where Roger Federer and Rafael Nadal are present. Striving for a podium finish is the challenge set for luxury SUVs (other than the Lexus RX350), because first place just ain’t in the cards.

When the Lexus RX300 first arrived in North American showrooms, its spaceshipesque exterior and unique configuration made sales easy to come by for Toyota Motor Corporation. Competition is now abundant; the RX350 isn’t nearly as good-looking as the first RX300; and Lexus has joined its parent company in a class set apart from automakers with tarnished, but still excellent, reputations. Even so, May 2010’s Sales Stats, as you’ll see in the Graph below, show the Lexus RX350, along with its hybrid RX450h brother, to be the best-selling luxury utility vehicle in America. In fact, ranked with every SUV, crossover, CUV, SUT and whatchamicallit, the Lexus RX made its way into the Top 10 best-sellers list in May.
Conquering the midsize Lexus crossover appears to be an impossible task. For luxury SUVs and their ilk, gathering up half as many sales would be a noble goal. 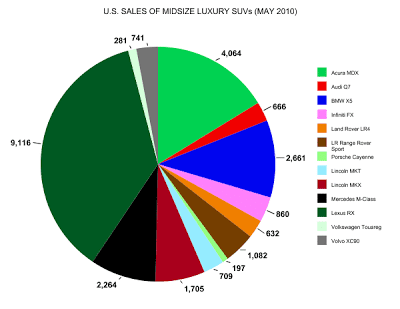