It was roundly acknowledged on the Kia Borrego’s arrival that there wasn’t really much wrong with the vehicle itself apart from its timing. As a competitor for the Chevrolet Tahoe, the 2009 Kia Borrego was never going to be a huge seller because, well, General Motors owns the large SUV segment like Hyundai owns Kia.

Therefore, to see only 20 sales of the Kia Borrego in Canada in July 2010 won’t surprise you. That is a substantial drop from 30 sales last July, however, quite in keeping with the Borrego’s 51% drop year-to-date. Tahoe sales fell in July, too, but they’re up 39% through the first seven months of 2010. Year-to-date Suburban sales have risen, too, as have sales of the GMC Yukon, GMC Yukon XL, Ford Expedition, Nissan Armada, and Toyota Sequoia. That about leaves the $37,395 2010 Kia Borrego as the only large mainstream SUV to post declining sales in 2010. Kia’s problem? A growing brand it may be, but the Borrego was very, very late to this party with an SUV that failed to attract attention to itself.
There is symmetry for this story among large luxury SUVs. The least among these in July, the $89,750 2010 Lexus LX570, actually increased sales by 1 unit in July 2010, but year-to-date sales of the Lexus LX are down to 109 from 147 through July. Cadillac Escalade sales have risen, though, and so have sales of the Lincoln Navigator, Land Rover Range Rover, Infiniti QX56, Lexus GX460, and the Mercedes-Benz G & GL-Class brutes. What’s wrong with the LX? Well, the same could be said of the Lexus GX, and GX sales are rising, but….. to put it bluntly, jumbo luxury SUVs are supposed to be all class inside and all crass outside. The Lexus LX570 is classy inside and out.
Numbers for large SUVs of every kind, luxury or not, are in the Graphs below. 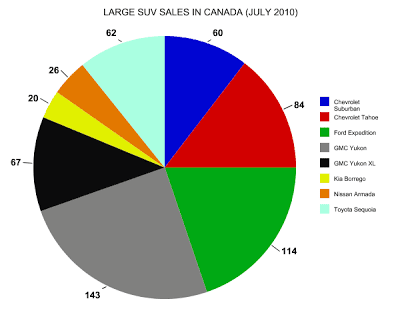 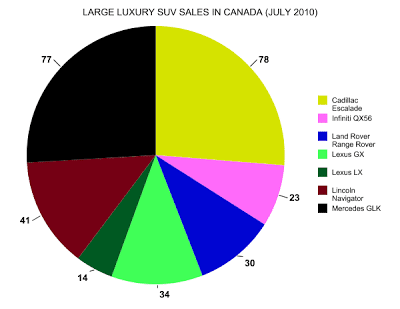