How does one go about explaining GM Canada’s 805% year-over-year monthly sales increase of the GMC Yukon, or the Yukon’s 286% jump from one month prior? Twitter has yet to answer, and The Good Car Guy readily admits that the only obvious possibility would be discounts of epic proportions. Even then, how did General Motors find an extra 500 people to enter the showroom, people who wanted to consider the purchase of a 2010 GMC Yukon? This isn’t like finding 500 more Camry buyers in the United States. General Motors Canada sold a total of 354 large SUVs in July. The total mainstream large SUV market in July was barely larger than the GMC Yukon’s August sales total. Unprecedented stuff, friends. Unprecedented.

As for large luxury SUVs, sales increases were the name of the game. Cadillac’s Escalade posted an 18.6% jump over August of 2009. Lincoln Navigator sales were off by three units in August but are up 56% year-to-date. The brand new $73,000 2011 Infiniti QX56 helped Nissan’s luxury brand realize gains of 163% in the large luxury SUV category. Range Rover sales leapt forward at a rate 62% up on August 2009’s sales pace. Year-to-date, sales of the Land Rover Range Rover are up 81.6%. At Lexus, the GX460 posted a 30% improvement and at Mercedes-Benz, the combined efforts of the classic but low-volume G-Wagen and the popular GL-Class have resulted in a 33.4% year-to-date improvement. August 2010 results were down slightly. Only the Lexus LX570 is truly struggling to find traction in 2010. August sales were down from 24 in 2009 to 15 this year. Year-to-date volume of the Lexus LX570 is off by nerly 40%.

Details on actual sales figures are in the Graphs below. 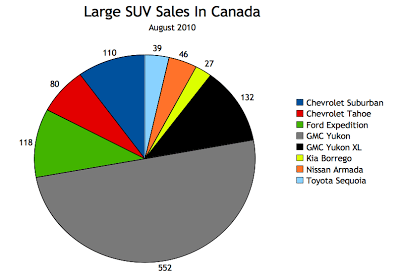 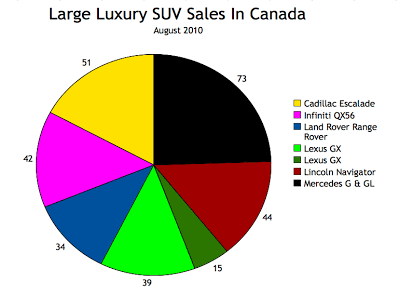