You need space. For your peeps, your stuff, the stuff belonging to your peeps, and for yourself. Sometimes you need to tow things. Every now and then a bit of extra ground clearance would come in handy. Since we’re being open and honest, you might as well admit to requiring luxurious surroundings. Nothing ostentatious; but a bit of leather here and there won’t do any harm. Your budget isn’t limitless by any stretch of the imagination, but you’ve got some coin to play with.

General Motors owns the Large SUV segment. It’s almost as though GM is the only automaker with the PIN which grants access to the category and the company collects royalties each time a rival automaker wishes to gain access to the PIN. Pretenders to the throne are actually pretty nice vehicles, even the dreadfully slow-selling Kia Borrego. Yet three-quarters of the market belongs to General Motors.

And before you, oh Prius driver, get up in the face of a large SUV owner to lambast him (or her) for driving a jumbo SUV, make sure he’s not carrying around six or seven passengers. Guzzle a lot of fuel they may, but a large SUV with a soccer squad in the back is far more efficient than most small vehicles with one or two travellers. 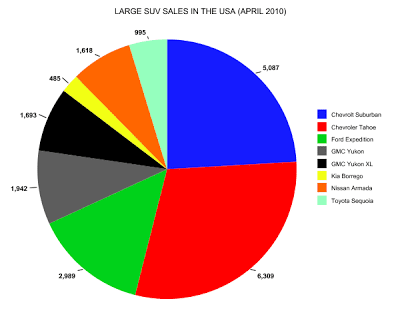