Let’s be clear: GoodCarBadCar.net is as willing as any other website to give credit where credit is due. But the Ford Expedition was not Canada’s best-selling large SUV in October 2010. In many Graphs, The Good Car Guy combines identical vehicles for the purposes of saving space. Think of the Ford Escape and Mazda Tribute, for example. In the Large SUV Sales chart, however, there’s no need to save space. Thus, the Chevrolet Suburban, Chevrolet Tahoe, GMC Yukon, and GMC Yukon XL are separated. Combined, even as duos – regular and stretched – the GM brutes have the Expedition beat. It is kind of interesting that the Suburban out-sold the Tahoe in October, but at volumes these low, anomalies happen.

As for Large Luxury SUVs, GM is not the victor. No, the crown goes to the Mercedes-Benz G-Wagen…. in concert with the more mainstream Mercedes-Benz GL-Class. 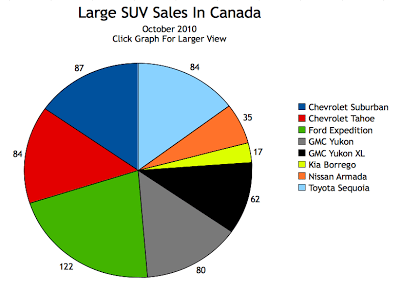 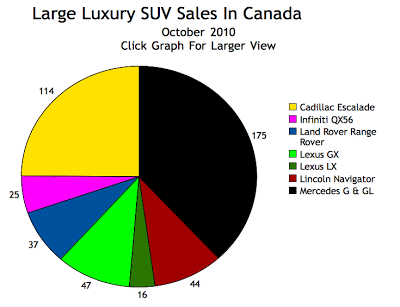