The individual parts of the large luxury SUV segment are on fairly equal terms. Hear me out. Using the most recent data as an example, September 2010 Sales Stats show the difference between America’s favourite large luxury SUV, the 2010 Cadillac Escalade and Escalade ESV, and the second fiddle, the Mercedes-Benz GL-Class, to be just 46 units, less than two days’ worth of Escalade sales.

Further down the food chain, the Lexus GX, Infiniti QX56, and Land Rover Range Rover aren’t much more than 200 sales apart. After the loveable Range Rover, the Lincoln Navigator is only another couple hundred units abaft. Scan the Graph further to see the Lexus LX. Another couple hundred units away you’ll find the LX’s platform-mate, Toyota’s Land Cruiser. Although obviously a teeny-tiny market, the difference in sales success between America’s most popular large luxury SUV and America’s least favourite large luxury SUV in September was just 1983 new SUVs. During the same period, the gap between the Toyota Camry and Honda Accord, America’s two most popular cars, was far greater.

To be fair, an analysis of the mainstream large SUV market would reveal much the same. The average American can’t agreee with his neighbour on which large SUVmaker deserves his or her hard-earned money. 18,800 non-luxury jumbo SUVs were sold in America in September 2010 – not much more than a third were the #1 seller, GM’s Chevrolet Tahoe. 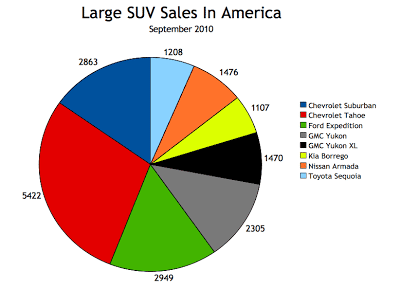 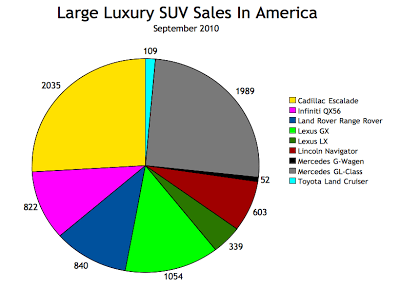