This is the first time large luxury SUVs and large mainstream SUVs have been placed into the same post. For quite a few weeks now, Sales Stats have been released by GoodCarBadCar.net in condensed form, Graphs sharing space with Graphs. Rather than link large luxury SUVs with luxury SUVs of the midsize and small variety, it seemed like a good idea to display the contrast in luxury and non-luxury for July 2010 auto sales info.

What becomes more obvious when seen in the light of each other is the supremacy of the GMT 900 platform. Encompassing the Chevrolet Suburban and Tahoe, GMC Yukon and Yukon XL, and Cadillac Escalade, GMT 900 gathered up 16,740 sales in July. But wait a second: those 16,740 sales don’t include the Chevrolet Avalanche, Cadillac Escalade EXT, or General Motors’ closely related pickup trucks. Nevertheless, 16,740 sales off one platform – if eligible – would have placed GMT 900 second among America’s best-selling SUVs in July 2010.
More importantly to General Motors, sales of the Cadillac Escalade, Chevrolet Tahoe, and GMC Yukon were higher in July than in July 2009 or in June 2010. Suburban and Yukon XL sales didn’t measure up to last month’s figures but were better year-over-year.
July 2010 Sales Stats on every large SUV and large luxury SUV are in the Graphs below. 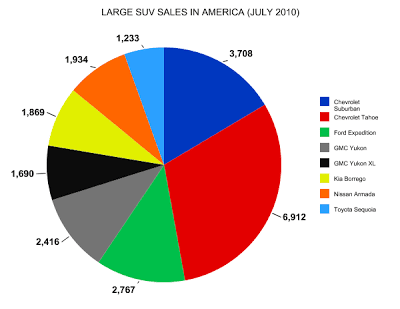 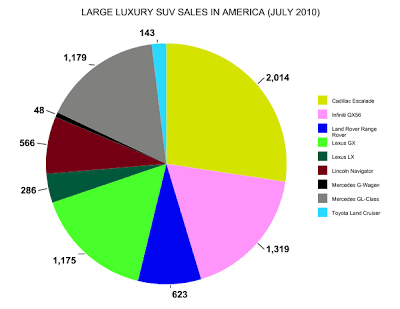