Home
All Vehicle Rankings
SUV Sales
Large SUV Sales
Once this month, and just the once, any extra analysis sought out by you, the reader of GoodCarBadCar.net, will be done by yourself. But first, there’ll be quite a bit of extra data available for you to sink your teeth into. Large SUVs and their luxury counterparts – knowingly coined large luxury SUVs – are something of an enigma to those who find them unappealing. “Who buys these these things?”, they ask. “Why do they buy these things?”, they ask. “How do they fuel these things?”, they ask again and again. As a result of their somewhat mysterious image, particularly in Canada where vehicles and fuel are more expensive, tracking the sales figures of large SUVs and their luxury counterparts is a bit like chasing a fruitfly around the kitchen. You won’t learn anything about his patterns – he has none – and you’ll spend a lot of time accomplishing nothing. Nevertheless, here’s some data.

Chevrolet Suburban sales in 2010 are double 2009 levels. Chevrolet Tahoe sales were up 34.7% in September compared with September 2009. Ford Expedition sales dropped 29.2% in September. The 2011 Ford Expedition is still powered by V8s only despite the addition of a V6 and a turbocharged V6 to the 2011 Ford F-150 range. GMC Yukon sales jumped 167% in September. GMC Yukon XL sales would need to increase more than 90% to match Chevrolet Suburban sales. Kia Borrego sales have dropped 41.7% so far in 2010. With another 36 sales, Nissan could say Armada sales had tripled so far in 2010. Toyota Sequoia sales increased 5.6% in September.

On its website, Infiniti says the 2011 Infiniti QX56 has “an ingenious suspension system that drives like a sport sedan”. Land Rover’s Canadian website says the Range Rover is “the world’s most capable luxury vehicle”. Cadillac believes its “Escalade SUVs are in a class by themselves”. Lexus says the ” GX 460 can challenge the most formidable off-road conditions with absolute confidence” and the 2011 Lexus LX570″ sets the standard for luxury cruising, rugged off-roading and full-out towing capacity. Of the Navigator, Lincoln feels that its “power-deployable running boards command attention”. Mercedes-Benz Canada makes the strong suggestion that the GL-Class is “taking luxury to a new level”. “Inside the G-Class”, Mercedes says, “you’ll always be perfectly comfortable.” Bold claims for bold vehicles. 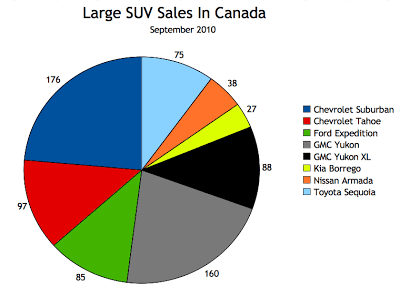 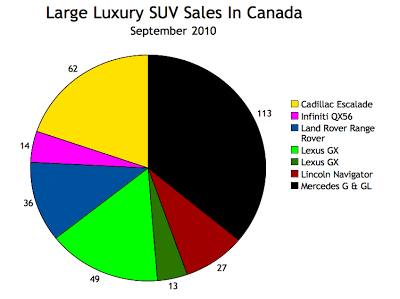