In the relatively recent past, Toyota discovered how to build the perfect American sedan. They called it the Avalon. Unfortunately, over time the Toyota Avalon became one of the ugliest vehicles on the market.
Nissan never decided to build the perfect Buick, but its Maxima has steadily gained weight and lost appeal, despite fond memories of the old 4-door sports car. Hyundai is competing with Lexus and Mercedes-Benz, in one measure or another, with a rear-wheel drive luxury sedan. Nevertheless, “Hyundai” is a terrifically mainstream name and will be so long as every other car in its lineup competes with Ford instead of Lincoln.
Which leaves the quintessential American sedans. The new Buick LaCrosse is wonderfully executed, and consumers are agreeing with their wallets. Over at Chrysler, the 300 isn’t as appealing as it was a few years back but still looks like nothing else. Then there’s the Ford Taurus, covered more than adequately here on GoodCarBadCar.net. This is likely the surplus Sales Stats Graph for the month – the goal is to cover a semi-forgotten category along with the midsize luxury sedans and small SUVs. 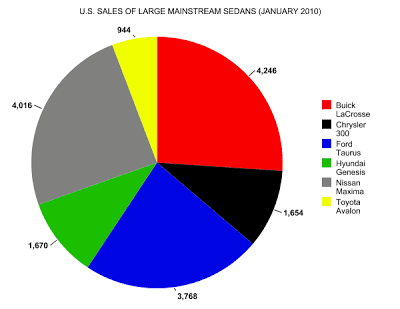