Up 72% so far this year, sales of the BMW 7-Series were far stronger than the performance put forward by any other large luxury car competing for marketshare in the USA in August 2010. Last year at this time the BMW 7-Series was trailing the Mercedes-Benz S-Class by a healthy margin. Through two-thirds of 2010, it looks as though the BMW’s 947-unit lead over the S-Class is insurmountable. All this has occurred with rising S-Class sales. It should be noted, however, that the Jaguar XJ is presently Jaguar’s best-selling model. August sales jumped 755% compared with August 2009.

Setting aside the bargain-priced Chevrolet Impala and the Chrysler brothers for just a moment, have a look at the revitalized 2010 Ford Taurus (up 50.7%), handsome Buick LaCrosse (up 89.6%), and surprisingly successful Nissan Maxima (up 14.8%). Even a handful of years ago, this segment was believed dead in light of huge volume sellers like the Toyota Camry and Honda Accord. The Taurus, LaCrosse, and Maxima sold in greater numbers in August than the Mazda 6, Chrysler Sebring, Dodge Avenger, Volkswagen Passat, and Kia Optima.
Details on the successes and failures of every large car available in America can be seen in the Graphs below. 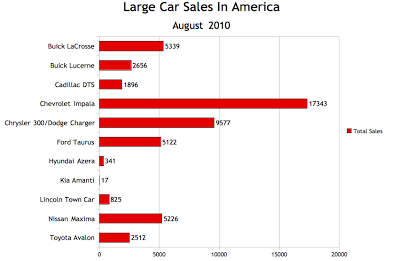 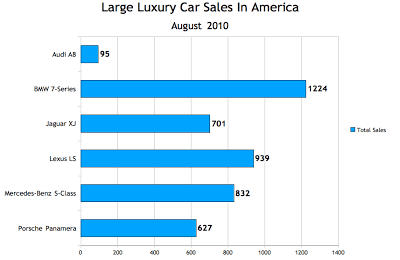