With many of Canada’s most popular small cars already discussed in the 20 best-selling cars post from last week, this is as good a time as any to look at a handful of less successful models.

To talk about the slight year-over-year slide in Caliber sales reported by Dodge in July would be to ignore the true failings of the Caliber. Forget the decline of 21 units – the overall Canadian new vehicle market was in decline, too – and pay attention to the Caliber’s paltry volume, just 700 sold during a 31-day period in which Canadians acquired more than 141,000 vehicles. The supposedly ultra-niche Fiat 500 nearly out-sold the Caliber last month. The Caliber’s domestic small car rivals sold about four times as often.

Low supply is the reason, but Honda’s 312 July Fit total doesn’t feel any better to sales reps who need cars to sell. Honda Fit sales were down 34.6% in July 2011. Toyota Yaris sales fell 36.9%. Still in the subcompact field, the 2012 Hyundai Accent is yet to take a firm hold (some very cheap 2011s remain) and sales dropped 14.6%. Surely that’ll turn around soon, unless small car buyers flock to the more handsome 2012 Kia Rio in the fall. As Kia Canada waits for the new car, the old model slid 28.6%. Nissan Versa sales plunged 29.1%. The Ford Fiesta, still quite fresh at this time last year, was up 234%.

The typical Canadian family is more likely to choose one of the cars above than one of the cars below. That said, the Ford Fusion was Canada’s seventh-best-selling car in July. Fusion sales rose 37.5% last month. Its year-to-date lead over the Hyundai Sonata is now at 2190 units.
On the subject of unsuccessful midsize cars, let us compare the Mazda 6 with the Subaru Legacy. See, the Legacy isn’t really all that unsuccessful. It’s prominent sibling, Subaru’s Outback, makes the Legacy a cheap addition to the assembly line. Besides, sales of the Subaru sedan are up 3.6% this year.
The Mazda 6, on the other hand, does not possess the same economies of scale. There really isn’t much Mazda midsize scale at all; not in Canada; not in the United States. Mazda 6 sales dropped 46% in July and are down 37.6% through the first seven months of 2011. During a conversation with a Mazda sales consultant on the weekend, he let slip that, “We don’t really have anything for Mazda 3 customers to move up to other than the 5, and not everybody wants a small van.”
He felt the CX-7 was too big a leap, but that the 2013 Mazda CX-5 will be a big help. We were standing 20 feet away from a brand new Mazda 6, a handsome and capable car. Mazda Canada has four models which sell in higher numbers than the Mazda 6, and the antiquated Tribute is only a 161 sales behind so far this year. 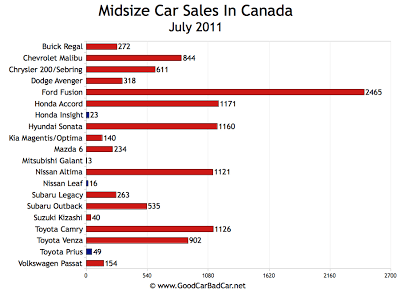 Retail sales of the Chevrolet Impala dropped 71.5% to just 101 in July 2011. Overall Impala volume was down 73.8%. That was a bad enough result to land the Impala on Canada’s Worst-Selling Cars list for July. It also gave plenty of room for the Dodge Charger and Ford Taurus to slot in ahead of the Impala in the large car category.
The revamped Charger posted an impressive 63% year-over-year improvement. Its platform-sharing partner, Chrysler’s 300, was down 55.4%. Ford Taurus sales, meanwhile, are pitiful in contrast to the Ford Fusion’s midsize class-dominating 2465 but are, in reality, pretty good for a big car with a pricetag between $26,484 and $43,902. (The 2012 Taurus starts at $26,474 and rises to $43,892 for the SHO, destination not included, of course.)
Taurus sales jumped 74.4% in July. The Good Car Guy drove one for a week a while back. The Taurus’s serious on-road presence can’t be dismissed. And it has a huge trunk. 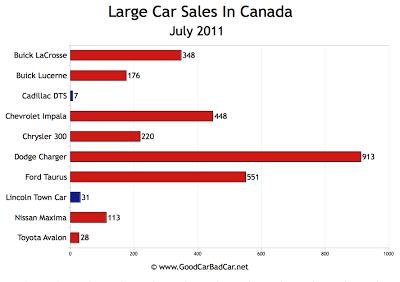