Hyundai sold 292 copies of the company’s bold Equus luxury sedan in America in September. In GoodCarBadCar.net’s large luxury car chart, the Equus goes unmentioned because of its low price. At $58,750, the Equus costs $36,750 less than the Mercedes-Benz S550. GoodCarBadCar.net places the Equus in the midsize luxury car sales chart where prices align more closely with the big Hyundai.

You’ve already figured out that 292 sales would land the Equus in last place in the chart below. The Audi A8 posted a 395% year-over-year improvement in September, but with 411 September sales, doesn’t measure up much better than the Equus. Jaguar XJ sales slid 3% to 462. The Porsche Panamera was down 18% to 514. Lexus LS sales actually rose, though only by 17 units. The BMW 7-Series was up 11% from September 2010’s 783 sales.

The class leader, as usual, was the Mercedes-Benz S-Class. Sales fell 15% in September, but the S-Class still beat its nearest rival, the 7-Series, by 578 units. 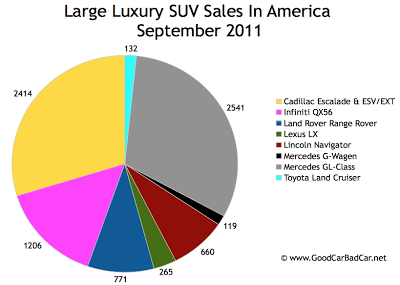