The vehicle believed by many to be The Best Vehicle In The World is a long way from being the best-seller in its own segment in the United States. The Land Rover Range Rover is still wildly impressive but its age is beginning to show against newer, trendier Large Luxury SUVs. Its main American rival, the Cadillac Escalade, is seen in the Graph below without sales of its EXT configuration but still manages to collect more sales than any other jumbo luxo sport-utility vehicle thanks in no small part to its status as the symbol of luxury; the symbol of Ess-You-Vee.

Of course, the Mercedes-Benz GL-Class sells like crazy because it’s just plain good. It’s available as a powerful SUV (GL450), an efficient and powerful SUV (GL350 Bluetec), or a supremely powerful SUV (GL550). The options aren’t limitless, but in this segment, that’s a broader spread than can be found elsewhere. Keep in mind, the Toyota Land Cruiser and Lexus LX570 are very much the same vehicle. In most cases The Good Car Guy would combine sales, but in this case space is plentiful so separate figures are provided. 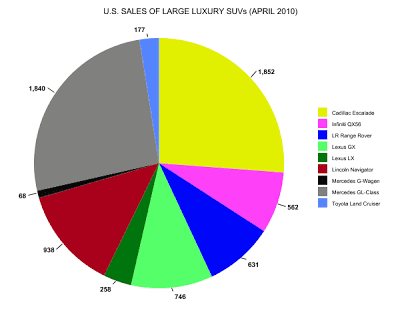