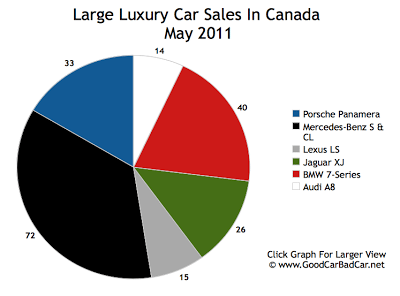 Home
All Vehicle Rankings
Passenger Car Sales
Large Car Sales
Large Luxury Car Sales
Amidst the normal conversation The Good Car Guy begins relating to the popularity of large luxury SUVs in contrast to large luxury cars, some facts are set aside for the sake of brevity. So hear this instead.

Canadian sales of BMW’s 7-Series dropped 37.5% in May 2011. That drop only equals 24 units, true, but it takes the 7-Series down to a level only slightly better than half Mercedes-Benz’s S-Class/CL-Class total of 72. Sales of the biggest Benzes were down 7.7% last month.

The reinvigorated Audi A8 is way up on last year’s figures: 250% in May and 592% year-to-date. But the A8 reached just 14 sales last month. That’s fewer than any of its competitors, even the beleaguered Lexus LS, sales of which improved in May but remain down on the year. Sales of another reinvigorated luxury limo, the Jaguar XJ, were up 767% in May 2011, and nearly doubled up on the A8.

On the large SUV front, the most popular luxury competitor fared better this year than last. Mercedes-Benz GL-Class/G-Wagen sales rose 11%. Cadillac Escalade sales nearly remained level, falling to 92 from 87, the figure achieved during the same period last year. 11 of those 87 Escalades were EXTs, which can be seen separately in the truck sales chart here. Sales of the regular-wheelbase Escalade sport-ute were up to 58 from 54.

Toyota Canada didn’t sell any Land Cruisers in May 2010; this year there were 15 of these un-marketed vehicles sold. Range Rover sales were static. Infiniti QX56 sales rose from 13 to 18, a 38.5% jump. The Lincoln Navigator was up 18.8%. Sales of the Land Cruiser-related Lexus LX were down 31.3%, however. 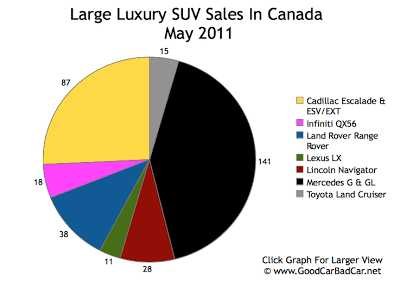