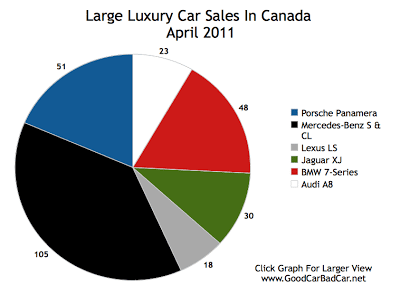 Home
All Vehicle Rankings
Passenger Car Sales
Large Car Sales
Large Luxury Car Sales
Canadians registered 254 new full-size luxury cars in April 2010. One year later, Canadians acquired 275 new full-size luxury cars, some of them probably being the same Canadians who couldn’t get over the Porsche Panamera’s rear end like they thought they would. Or perhaps they switched from the $236,000 Mercedes-Benz S65 AMG to the $151,500 S63 AMG so they could save on fuel. Yeah. Right.
Sales of the S-Class – and its CL-Class coupe derivative which will, by the way, be turning into the S-Class coupe soon – rose 19% in April. 54 sales abaft was the Porsche Panamera, up 11%, the only Porsche passenger car with increased year-over-year sales in April.

The S-Class wasn’t the only Benz to dominate its segment last month. The E-Class out-sold all rivals in the midsize luxury car category, and as you can see below, the jumbo GL-Class sold with just as much frequency as the Lincoln Navigator, Land Rover Range Rover, and Cadillac Escalade put together.
And still the Toyota Land Cruiser finds new Canadian owners. Check Toyota.ca and you won’t find the Land Cruiser. Use Toyota.ca’s search function and the only results featuring the Land Cruiser relate to the FJ Cruiser or every Toyota nameplate under the sun. Inquiries to Toyota on Twitter some months ago did not result in a response. 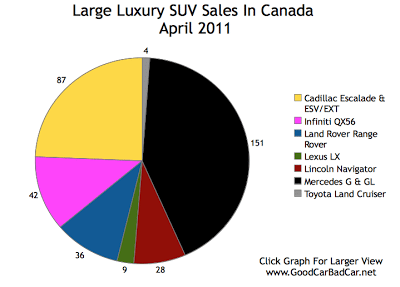