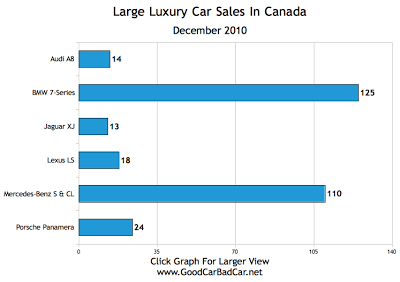 Home
All Vehicle Rankings
Passenger Car Sales
Large Car Sales
Large Luxury Car Sales
428 jumbo luxury sport-utility vehicles were sold in Canada in December 2010. Slightly more than one-third of those sport-utes were Detroit designs, a.k.a. “domestic” vehicles. 17.5% of the large luxury SUV market was Japanese. Nearly half were European, including 39 beautiful Land Rover Range Rovers. The 2011 Range Rover has a base price of $94,290.

Now, it’s not surprising to see European automakers dominating the large luxury car segment. There were 304 of these limos sold in Canada last month – 90% were German. Whither the Infiniti Q45?

With the S-Class, CL-Class, G-Wagen, and GL-Class totalled together, Mercedes-Benz Canada sold 277 vehicles with base prices averaging $107,300. 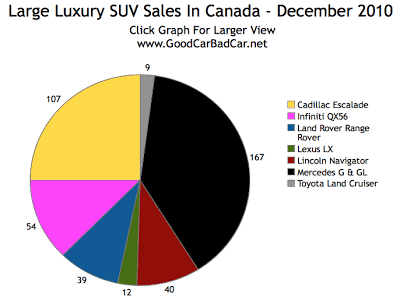