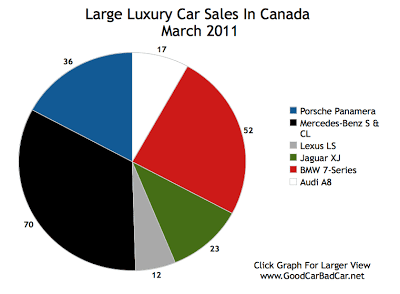 Home
All Vehicle Rankings
Passenger Car Sales
Large Car Sales
Large Luxury Car Sales
53% of all BMW 7-Series sedans sold in Canada so far in 2011 came in the month of March. 46% of all new vehicles sold in Canada in 2011 were acquired in March, so it’s not that crazy to see that March was worth so much to the big bruiser of a Bimmer. Lexus LS sales plummeted 61% in March to just 12. Only one Lexus LS600hL was sold in March, down from 5 in March 2010. Porsche Panamera sales took a slight dip, down four units (10%) to 36, but are up by one unit (1.3%) year-to-date.

Sales in Jaguar showrooms across Canada increased 8% in March 2011, no thanks to the Jaguar XF’s 25% decline nor the Jaguar XK’s 13% drop. One year ago Jaguar Canada didn’t sell a single XJ; this year Canadian residents picked up 23. XJ sales are up 378% in 2011.

As for jumbo luxo sport-utility vehicles, there is not as much balance as we just found in the large luxury car segment. Nearly four out of every ten large luxury SUVs sold in Canada in March were Mercedes-Benz GLs (or, rarely, G-Wagens). Barely fewer than one-fourth were Cadillac Escalades. Sales of all others combined don’t measure up to Mercedes-Benz’s total. Speaking of Cadillac, 23 of the Escalades sold were of the long-wheelbase Suburbanesque ESV sort, another 18 were Avalancheesque EXT trucks. The remaining 65 were regular Escalades. 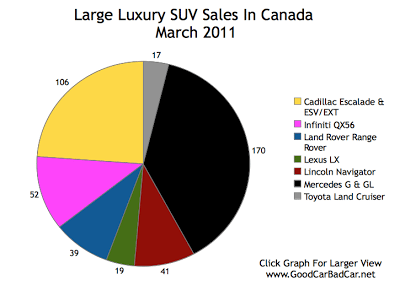