The car market most notable as the category built for the rich and famous is in an unusally balanced state. The U.S. story was covered back on February 8th; Canadian buyers of large luxury cars are singin’ the same tune. 126 premium limos were sold in Canada in January 2011 – 31% were Mercedes-Benz S-Class sedans (and CL-Class coupes), 7.1% were Jaguar XJs. Audi finished 2010 with 5.4% of the large luxury car market in Canada, a number The Good Car Guy said, “must improve.”

It did. Audi’s slice of the pie grew to 18.3% in the first month of 2011, almost matching the volume of BMW’s still-fresh 7-Series. Not conventionally beautiful, the 2011 Audi A8 is a striking piece of aluminum and could, with Audi’s constant marketing, maintain its position near the top of the large luxury car standings alongside a trio of other German big shots.

In terms of large luxury sport-utility vehicle sales, two American companies join the fray and combine for 40% market share. Of the 279 sales grouped into the pie chart below, 106 hail from across the Atlantic; 61 from across the Pacific. That 40% is mostly taken up by the Cadillac Escalade; Lincoln Navigator sales slid 29% in January 2011. Strangely, the $89,950 Lexus LX570 was out-sold by the Toyota Land Cruiser in January. The Land Cruiser isn’t even officially marketed by Toyota Canada. Both vehicles saw their sales cut in half, however, when compared with January 2010. 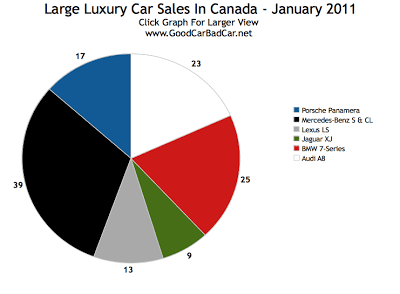 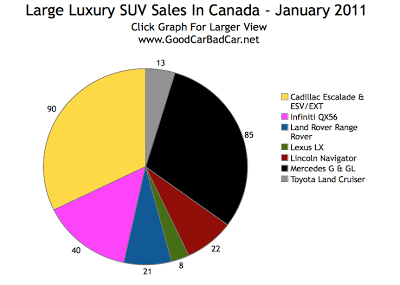