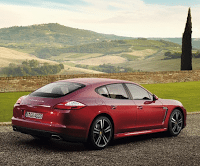 Why have uberluxury car buyers been so hesitant to acquire a new Audi when luxury car buyers with smaller budgets are buying Audis in record numbers, in numerous segments? Audi Canada sales were up 26.7% in 2010, an increase of more than 3023 units. Though the new 2011 Audi A8 only came on line late in the year, it’s important to realize that only 36 of those extra 3023 sales came from the A8 line. 40% of the growth was from the company’s two SUVs; another 26% from the sporty A5/S5 tandem. What’s wrong with the Audi A8?

The question could be partially answered by explaining what’s right with the Mercedes-Benz S-Class and BMW 7-Series, another explanation leaning on the strength of the Porsche badge. By old-fashioned big luxury standards, the A8 is new. And although that hasn’t been too much of a factor with the Lexus LS, you can see how the Graph doesn’t show the LS competing with the S-Class and 7-Series like it does in the States, a Lexus bastion. Audi’s 2010 Canadian market share in the large luxury car category was just 5.4%, a must-improve number in 2011.

To be conquered for the second consecutive year by Mercedes-Benz in a segment pioneered by Land Rover’s Range Rover, strengthened by the Lincoln Navigator, and fortified by its own Escalade must be a bit upsetting for GM Canada. As recently as 2007, the Cadillac Escalade beat the Mercedes-Benz GL-Class (and G-Wagen, it must be noted) by 776 sales. 35% of the Canadian large luxury SUV market was owned by Mercedes-Benz. It is nice to know that one in ten buyers went for the gorgeous Range Rover. 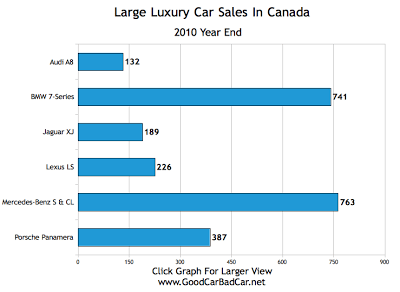 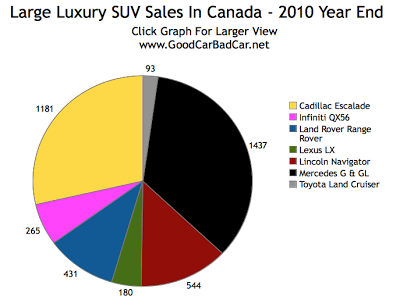