Buyers of large luxury cars, the executive limos of the world, have few options to choose from. Yet all six candidates are worthy of their attention. Admittedly, every rich friend in your gated subdivision already seems to have a Mercedes-Benz S-Class or BMW 7-Series, but that’s just added reason to go whole hog and opt for the $122,600 Alpina B7. Search for exclusivity and you’ll find it.

The Lexus LS hasn’t been treated kindly by the press in recent years, but it’s not ugly, and it is certainly refined. Flick a switch – or in this case, close a door – and shut out the world. The Porsche Panamera is ugly, but it’s most certainly the sports car of the bunch. Does it get any more avant-garde than the new Jaguar XJ? And have you seen the Audi A8’s interior? Yowzah. 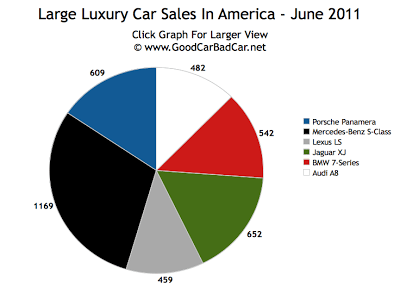 It costs money to build large luxury cars and large luxury sport-utility vehicles. It’s not as though every dollar a customer hands out goes right back to the manufacturer. There are sales personnel, dealership principals, shipping companies, and parts manufacturers that need a cut. In the end, selling a $79,685 Land Rover Range Rover in Orange County, California, doesn’t net Land Rover HQ in Gaydon, or its Tata bosses in India, $79,685.

But let’s imagine for a second that it does. If every Range Rover sold in the United States in June 2011 was a base model – no options, no supercharger – Land Rover would collect $7.4 million. Sure, a lot of money changes hands in this transaction, but one thing’s for sure, Land Rover’s per vehicle costs don’t run up to $80K.

$7.4 million sounds like a lot, sure. The less prestigious Mercedes-Benz GL-Class SUV brings in even more for its parent company. So far this year, Mercedes-Benz has sold 11,036 GLs. Even if they were all basic $60,950 GL350 BlueTec sport-utes, that would still mean $672 million for Mercedes-Benz, or $157,555,750 in June alone. Again, we all know that money gets split up a thousand ways, not the least of which is repaying the debts a company owes itself for the cost of researching and developing the vehicle before a single example is even built, but that is serious coin.

If you’ve been wondering how luxury automakers can afford to sell models at such low volume, consider that using this equation for the $15,100 Honda Fit results in earnings of just $74 million in June for American Honda, less than half what Benz did with the GL. And you can be certain the profit margins on the Fit aren’t as good as they are on the GL-Class Benz. 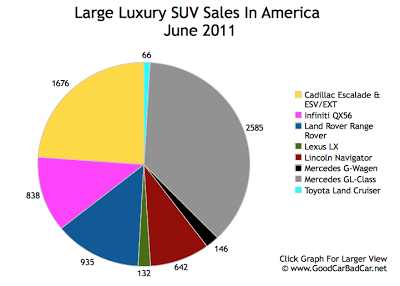