Wow, and finally, U.S. dealerships started selling the 2011 Audi A8, and did so with some umph. Although low in the context of its competitors, 333 sales in a month is a figure so unlike previous iterations of this Graph that it seems barely believable.

CEOs and Vice-chairmen with the sort of money required to buy a full-size luxury car want the latest and greatest. And why wouldn’t they? Regular folk like you and me want the latest iPhone or Gran Turismo edition; large luxury car buyers just happen to be disposing their income on more prestigious and conspicuous gadgets. So, the outgoing Audi A8 had been around for a while.

For whatever reason – it was gorgeous and high-tech – the A8 was never popular. At all. In November 2010, however, Audi A8 sales jumped 220% as, Audi USA says, 310 A8s were “sold in the month’s final days.” 23 of the A8s sold were Typ 4E generation A8s, the old car. 32.7% of all A8s sold in the United States in 2010 were sold in November. 50% of the Audi A8s on their way to the United States have already been sold. But…. the Mercedes-Benz S-Class and Lexus LS were between three and four times more popular in November, so Audi still has some work for itself if the U.S. market is going to be kind to the A8.

Among large luxury SUVs, the Mercedes-Benz GL-Class continues its surge toward conquering larger slices of the pie. Mercedes-Benz says GL sales were up 47.9% in November and are up 36.6% year-to-date. Although not able to surpass the 3-pronged Cadillac Escalade lineup in November, the GL-Class trails the Escalade by only 4693 sales. At this time last year, the GL was behind the Caddy by nearly 9500 units.

Get up to speed on the whole large luxury automobile sales story by perusing the data below. 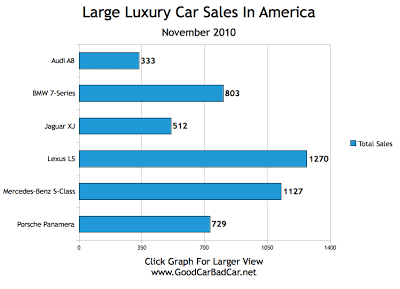 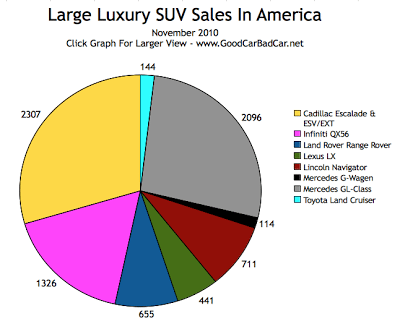