Small in volume but rich in tradition and… er, riches, these two large luxury categories are filled with vehicles which represent the pinnacle of regular passenger vehicle manufacturing. Take the Mercedes-Benz S550, for example, a $93,000 four-door sedan available with an 8-inch splitview entertainment option that’ll enable the passenger to watch a movie even as the driver keeps up with the GPS. S-Class sales were down just a bit in January; a 1.5% drop from January 2010. Look at the Porsche Panamera for a moment. Despite its tremendously awful exterior styling, the interior design has got to be considered one of the best of any vehicle. The 2011 Porsche Panamera Turbo will reach 188 miles per hour. Yikes. Panamera sales rose 13.1% in January.

On the sport-utility vehicle front, the oft-ignored 2011 Toyota Land Cruiser is priced from $68,020 and is fitted as standard with 14 speakers of JBL audio. January sales remained level at 145, just 2.3% of the overall large luxury SUV market. The Chevy Suburban-based $65,765 2011 Cadillac Escalade ESV uses Magnetic Ride Control to “read” the road 1000 times per second and adjust the ride every five milliseconds. The extended Escalade formed 26% of the Escalade family’s sales in January. Escalade ESV sales were up 49.5% compared with January 2010.

Perhaps of greater interest to industry observers and analysts is January 2011’s parity in the large luxury car sector. Just 364 sales separated the best-selling large luxury car (Mercedes-Benz S-Class) from the worst-selling large luxury car (Jaguar XJ) in January. The best-seller from December was bumped to number two; worst-seller status moved from Audi to Jaguar. While market share in the segment ranged from 28.8% for the Lexus LS to 9.5% for the Audi A8 in December, January’s range went from just 21.9% for the Mercedes-Benz S-Class to 11.9% for the Jaguar XJ. There’s also little doubt that the reinvigorated Jaguar XJ, all-new Audi A8, and still fresh Porsche Panamera have been thieving sales from the established players: the LS, 7-Series, and S-Class. In January 2010, Lexus, BMW, and Mercedes-Benz sold a total of 3212 vehicles in the segment while Audi, Jaguar, and Porsche sold 600. The first trio’s total dropped by about a third while the second trio’s total more than doubled one year later. 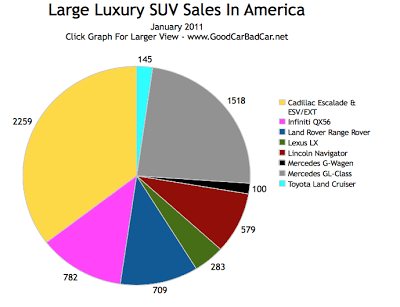 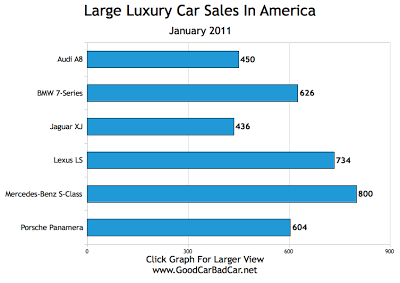