3633 large luxury limos were sold in America in February, excluding monsters like the Hyundai Equus, Cadillac DTS, and Lincoln Town Car. 30.5% of those 3633 sales were BMW 7-Series sedans; 70.8% of those 3633 sales were German vehicles. Lexus LS and S-Class Benz sales decreased; four of the Graph’s six participating vehicles posted year-over-year increases. The Audi A8 was up 962%. Jaguar XJ sales elevated to 356 from 11 as Jaguar XF sales dropped from 586 to 262.

As for the most popular jumbo luxo sport-ute, sales of the regular “short”-wheelbase Cadillac Escalade were down, but ESV and EXT sales bumped northward by 1.4%. 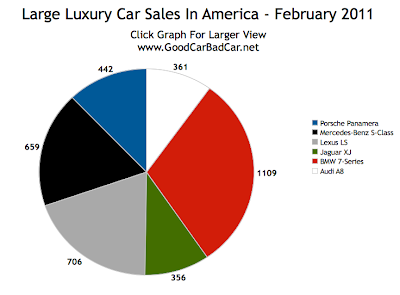 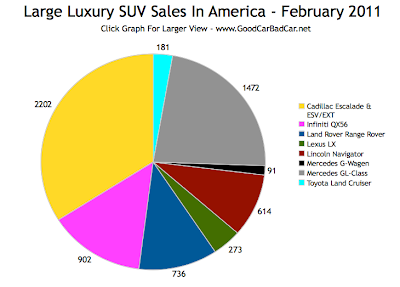