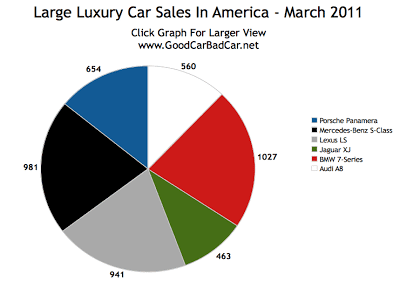 Home
All Vehicle Rankings
Passenger Car Sales
Large Car Sales
Large Luxury Car Sales
Prefer to consider the Hyundai Equus a rival for the cars in this Graph of large luxury cars? At GoodCarBadCar.net the Equus is located amongst the midsize luxury cars on pricing and prestige grounds. In March, were the Equus located here instead of there, the large luxury car market would grow to 4867 units and the Equus’s market share would be 4.95%, less than any other car in the segment.

Instead, by boundaries which restrict the segment to more prestigious limos, the BMW 7-Series grabbed 22.2% of the market. Meanwhile, the Audi A8’s market share grew from 9.9% in February to 12.1% in March.

Mercedes-Benz knows how to sell a big luxury sedan, for sure. But the SUVs… ah, now Mercedes-Benz really knows how to sell a big sport-ute. 2052 GL-Class and G-Wagens were sold in the U.S. in March, a figure which, together, out-performs the Cadillac Escalade. Sales of each Escalade variant fell in March. The EXT was worst off with a 6.3% decline. 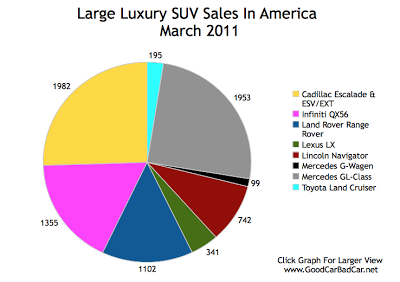