FORD TAURUS ALTERNATIVES ACROSS THE POND

After reviewing the 2010 Ford Taurus SEL AWD for GoodCarBadCar.net, my curiousity was piqued on numerous levels. Concluding that the Taurus’s innards were recompense reward for its gargantuan dimensions ended the question of how people live with the problem of finding a garage big enough to hold it. Realizing that people of my generation don’t need to buy the Taurus to like the Taurus; and that people of my generation liking the Taurus (even without buying it) is a very good thing for Ford helped allay my concerns over a name that is not well spoken of.

With those wonderings settled, I was left to muse upon one other stupefaction. If you wanted a Taurus but couldn’t have one, what would you be left with as alternatives? Take money out of the equation, because you can afford it. Remove age from the debate, since you’re over 40. That leaves geography as a reason for your lack of Taurus purchasability. You, yes you, live in Europe.
Here, then, are a handful of Ford Taurus alternatives available only Across The Pond.
—–
CITROEN C6: Nobody actually buys a large French car. That doesn’t stop Renault, Peugeot, or Peugeot partner Citroen from releasing a new model every now and then. The C6 happens to be one of The Good Car Guy’s 100 Favourite Cars, and to the best of my knowledge, that hasn’t helped sales either. Its strange concave rear window, relexed demeanor, and punchy diesels would make the C6 feel about as different from the Ford Taurus as the Taurus is different from the Crown Victoria. Rumour has it that sales of the C6 in Germany, a fairly crucial market, have been about ten times smaller than Citroen had hoped would be the case. Were the Citroen C6 available in America, its pricing would likely overlap with the Taurus Limited and Taurus SHO while placing a greater emphasis on luxury.
Perfect American Owner: Gwyneth Paltrow 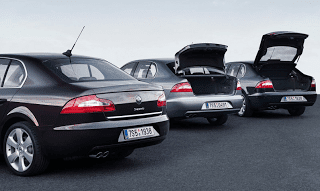 SKODA SUPERB: Volkswagen’s Czech subsidiary has done a good job modifying the Passat platform. The styling is conservative; the design of the rear end revolutionary; the desirability factor negligible. However, Skoda is all about screaming value. A Skoda Superb kitted out with a corncucopia of luxury fittings and all the fuel economy you’d expect of a large all-wheel drive V6 sedan wouldn’t be likely to surpass . Sales of the Superb in the UK in 2009 will be hard-pressed to be as high as Taurus sales in one good month in the U.S.
Perfect American Owner: An MIT Physics Professor
FORD S-MAX: Clearly not a large sedan – not even large in comparison to America’s “mini”vans – the S-Max is a gorgeous MPV with dynamic talent and available turbocharged power. In Europe, flocks of former mainstream car buyers have turned to niche products. Many of those products are low-powered luxury-badged cars, others are MPVs like the S-Max or Renault Scenic, while more still are crossovers like the Ford Kuga or tall six-passenger hatches like the Honda FR-V and Fiat Multipla. The S-Max is a great way to find the space you need without sacrificing the style that, if lacking, could make you look a little too footballer’s mum. Pricing sneaks in below the Taurus level. Sales figures are split amongst many Ford alternatives like the Focus wagon, C-Max, and Galaxy.
Perfect American Owner: Brad Pitt 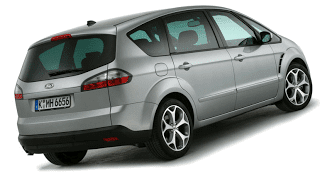