One month after Lexus slipped into a tie for fourth spot among large luxury car sellers in America – and being mocked for it – the Lexus LS is back on top. Porsche is up to speed with five Panamera variants. That fact helped secure third spot in the Large Luxury Car Sales Graph you’ll see below. Having moved on from the drastically ugly E65 7-Series, the 2010 BMW 7-Series sold well enough in July 2010 to beat out its most famous rival, the Mercedes-Benz S-Class.

Mercedes isn’t leaving well enough alone, however. In addition to the fuel efficient S400 Hybrid, the 2011 Mercedes-Benz S350 BlueTec could pump up S-Class sales volume substantially.
On the more mainstream side of the large car category, Nissan, Buick and Ford all stepped up to the plate with a fine July 2010 for the Maxima, LaCrosse, and Taurus. No, the volume put forth by those three is nothing like that seen by the Chevrolet Impala, but don’t believe for a second General Motors was making much money off deeply discounted fleet Impala sales in July. Sales of the 2010 Ford Taurus, Driven by The Good Car Guy last fall, were up 186.7% in July; up 116.4% through the first seven months of 2010.
Details on large luxury car sales and large car sales in general are in the Graphs below. 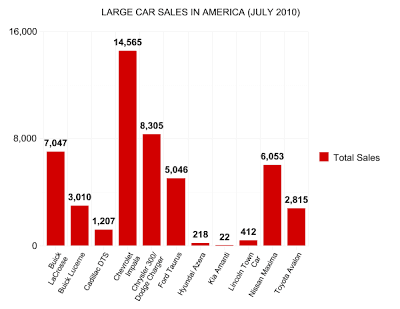 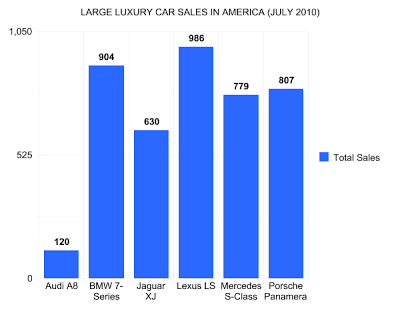